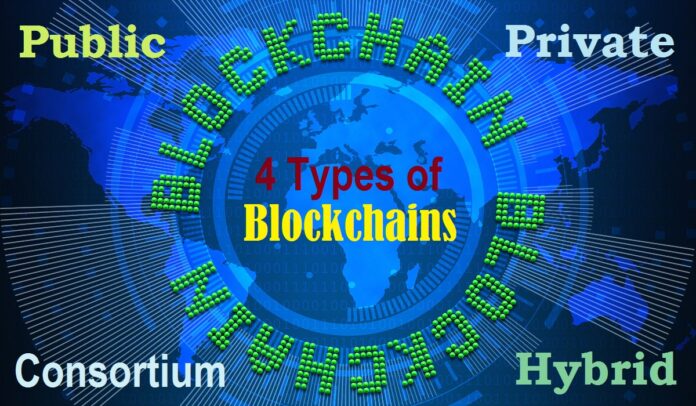 What is the blockchain and what types of blockchains are there?

A blockchain or chain of blocks is a type of distributed ledger system. That’s it, a database or accounting system that is managed and maintained through multiple control points (and not just one).

There are multiple examples of distributed record systems prior to blockchain technology and the health sector, one of the best known, as each health centre must be able to access and modify the file of each patient, regardless of which clinic.

The uniqueness of Blockchain

What makes the blockchain unique compared to the previous technology for these distributed ledger systems is the use of cryptography and the “block” structure of the network, through the mechanism called Hashing. Thanks to these elements, we can avoid one of the biggest problems of the digital age, double spending; and give rise to a registry system that is not only distributed but also secure and decentralized.

Bitcoin was the first cryptocurrency and P2P payment network in history, with a very specific function and tokenomics, due to its deflationary behaviour for the currency through the well-known Halvings.

Ethereum, on the other hand, is a programmable decentralized network, as well as the most advanced dApps ecosystem to date. Both Bitcoin and Ethereum are public networks, but… Are there other types? Well yes, let’s see which ones and what differences there are between them.

Let’s start by talking about public blockchains, those accessible to anyone with internet access. This type of blockchain is the first that existed, as we have said, with Bitcoin; and is characterized by keeping its data records, software and development open to the public.

These blockchains allow anyone to be part of the network, without restrictions, whether as a user, worker or miner; or as the administrator of a validator node. Decentralized networks or public blockchains have security measures that guarantee that no malicious actor can hack or manipulate its operation. However, the operation of the network is completely transparent and open.

Decentralization is another of the main characteristics of public networks, where there is no central authority to regulate their operation. This system has allowed meme token to have a place in the crypto world. And how is a network that is not controlled by a central entity maintained and continues to function?

Well, through an economic system integrated into the same network, for example, the mining of the Bitcoin cryptocurrency and the collection of commissions for each transaction that is carried out in the blockchain.

Mining or proof-of-work consensus mechanism is just one way to achieve agreement between the different nodes that make up a decentralized network, but there are other mechanisms such as the well-known staking or proof-of-stake consensus, which achieve the same goal but in a different way. much more efficient way.

Examples of public blockchains are in addition to Bitcoin: Ethereum, Dash or Monero. This type of blockchain also stores meme tokens on it. Especially the Ethereum blockchain has given a huge boost to creating different meme tokens.

As the blockchain has evolved over time, the use cases, applications and interests for this technology have also expanded to other sectors of society. Many companies and institutions have seen the potential of having a distributed ledger system that is both secure, transparent, and immutable.

In this sense, access to the network is restricted to users and elements previously authorized by the central unit that controls the blockchain. The economic maintenance of the network, unlike public blockchains, generally depends on the company behind it, responsible for the creation and management of the network itself. Private blockchains often do not have a native cryptocurrency, nor do they have a consensus mechanism such as mining or staking.

One of the most important private blockchain projects in the world today is Hyperledger, developed by the Linux Foundation and several companies in the technology sector. But we also have other examples such as R3 ‘s Corda, an enterprise blockchain consortium of over 200 members; o ConsenSys Quorum ( formerly JPMorgan).

Also Read About: How can I buy HOKK?

Finally, hybrid blockchains are, as the name suggests, a fusion between public and private blockchains. Access to these blockchains is private, controlled by a central entity, or several. However, the ledger, or distributed ledger, is publicly accessible to anyone with the internet from the blockchain explorer.

The health sector, as I said in the introduction, is an industry with clear use cases for this technology, improving the traceability and security of both patient information and supply chains in pharmaceutical production. And as with private blockchains, you don’t need mechanisms like mining, or having a cryptocurrency like gasoline; since the consensus of the network is achieved by other means that ensure that the data is correct.

In this sense, a hybrid network offers all the fundamental features of a public blockchain, such as security, transparency, immutability, and decentralization, but also restricts the ability to access view, or change transactions.

If you want to explore an example of a hybrid blockchain, XinFin is one of today’s benchmarks; a hybrid network for companies in the international commerce and finance sector, which is defined as the 3rd generation blockchain, being much faster and cheaper than the Bitcoin or Ethereum models.

Finally, this is only the first categorization for the blockchain, with which to understand the different degrees of privacy and decentralization for this type of distributed registry system. Meme tokens are mostly running on public blockchain like Ethereum. Tell me in the comments what you think and if you have any questions

Getting everything rolling With Online Conservative News Magazines